Heya. Writing this has made me realise that I’ve spent most of the past 3-4 years stressing. I work for a charity and it’s kind of draining, especially the past couple of years.

In the between-times, I did create some stuff: there was a writing course with Write Like a Grrl (“writing as radical self-love!”), making zines for my niece and nephew (one was a choose-your-own-adventure story, another was about Black Panther, and loving your blackness), and a couple of unfinished stories about qpoc friendships.

I also made a zine about the tv show Anne with an E – it was cancelled after 3 seasons, so I wrote season 4! That was fun to write.

I struggled with my identity during 2020-2021; also, like a bunch of people, my world shrunk. Reading books and zines, watching tv shows, and writing stories helped. There were two months living at my mum’s and seeing my family every day. That felt great after a year of covid distancing. While at my mum’s, I started roller skating. My sister skateboards, so we’d go out to the local skate parks and I’d do circuits while she practised tricks. It felt good just getting used to being on skates again..and this weekend I’m going to Skating Queer roller disco in Manchester! 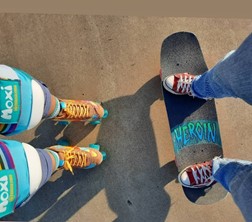 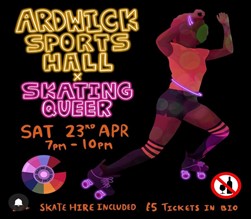 During June 2020, when white people discovered racism, I co-founded an anti-racism group at work which was really a group for poc to support each other, as well trying to get stuff changed in our charity. It was such a massively triggering time, and when talking to the black people in my life, we just supported each other; we tried to find joy in the small things, like dance videos, art, each other, and laughing at memes about whiteness…just checking in on how we were doing – still having those check ins. How are you doing?

What else has happened since the last zine fest? Not much. One major change was adopting a little hamster. His name is Soobie Mennym and he’s very cute. He hid behind my wardrobe for six hours the other night but other than that we’re becoming bffs.

Well a lot has happened since the first Over Here in 2018. I think we would need at least 20 blog posts to even start to cover it.
On a personal note though, I often think I’ve not done much, but in reality I have.
I work part time in retail and part time as a freelance artist, and whilst I wish I had created more artwork in the past 4 years, I don’t think I could have fitted in many more workshops, as that side of my work has grown and gown. I’ve delivered zine making and textile workshops, perfected delivering them online, got better with my tech skills making PDFs and videos. I’ve created some artworks via community projects, my favourite being a banner I made alongside the Community Programme team at People’s History Museum, which was about rights for migrant workers.
Another work highlight was making a zine and worksheets for the Black Art Trail at Bury Art Museum.
I exhibited a banner as part of a Girl Gang Manchester Exhibition alongside some wonderful Manchester artists, that sadly got cut short due to the pandemic.
I wrote a piece about Asexuality for Wellcome Collection and started to celebrate 10 years of poor Lass zine and podcast with co-creator Em.
Having 6 months off in total from my day job meant I could fit more freelance work in which also meant I didn’t have as much time to create personal projects, so made a few zines but not as many as I wanted. My creativity did peak quite early on during my furlough with me creating a stop motion animation about making a one page zine, there has been no stop motion sequels as of yet!
It hasn’t always been creativity, I found the past couple of years it’s been really hard to create and only done so for work, especially after what I call ‘Black Square Summer’. It’s harder to find joy even in little things like listening to music or reading. I’ve also not been able to attend a Tap dance class for a year, something I used to do weekly.
However I did get braid extensions for the first time ever (which were so heavy I think I developed new neck muscles) and me and my sister made our TV quiz show debut.
I hope to find more Joy I little things, and see people thriving in the near future! 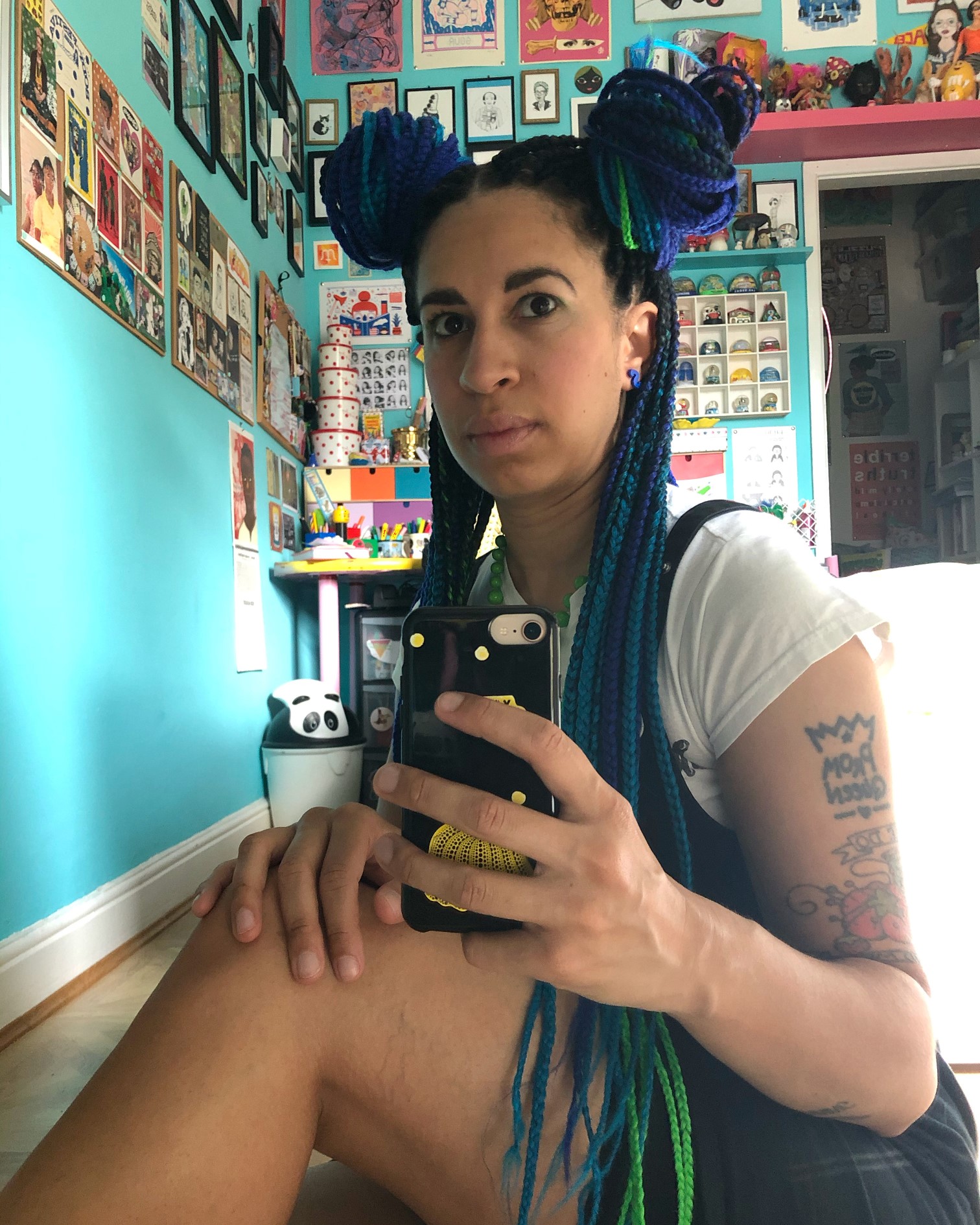 Heena
After a year’s break in 2019, we were all ready to do another Over Here in 2020, but I’m no Taylor Swift, recording all those lockdown albums, so the covid-19 pandemic threw me right off course. It’s a bit of a cliché to say that I know, but I like to keep reminding us what the government is so desperate to bury.

I’m not gonna lie, I’ve been in a slump for the past two years. Knowing that we’re doing another Over Here Zine Fest has given me a reason to wake up and come alive again, have a look around and see what’s going on, see what we can to address marginalisation in the arts, especially here in the north west of England.

After finishing up on the Commonword Archive project in 2022, I worked on a short-term Covid-19 at Ahmed Iqbal Ullah Education Trust. The Trust is a valuable resource; a library of fiction and non-fiction, pamphlets and reports that you can borrow for free if you are member of Manchester Libraries.  They also archive material that documents the stories and histories of Black / Asian / POC communities in Manchester.

I got involved with the Clean Air days at my local primary school, where the majority of kids are Black and/or Asian, so no: you cannot talk about the environment without talking about race. Pollution is dangerously high around the school at dropping off and picking up time.

I’ve also started helping out with Chit Chat Chai, a space offering basic English classes for women during term time. After the classes, there is a café with drinks, snacks and a craft table. It’s all free. I’ve only been involved for a few weeks, but it’s fantastic. I’ve met all kinds of women and it’s been really friendly.

Yeah, it sounds like I’m up to loads of wholesome stuff, eh. Well let me tell you the truth — I’ve also wasted a lot of time watching Bridesmaids over and over again even though I don’t think it’s very good. So I recently cancelled my Netflix, even though I know the new Bridgerton has Tamils in it. I’ve started reading Pride and Prejudice for the first time in an attempt to curb that hunger.

I also managed to knock my YouTube addiction. Over Here Zine Fest is a reason to be busy again, so hopefully this time I’ll stay on the wagon.

Here’s a question for you: Will we use zines to document what people of colour experienced in the covid-19 pandemic?

Below, some pictures from the start of lockdown, March 2020

The virus I drew when I stayed at home: 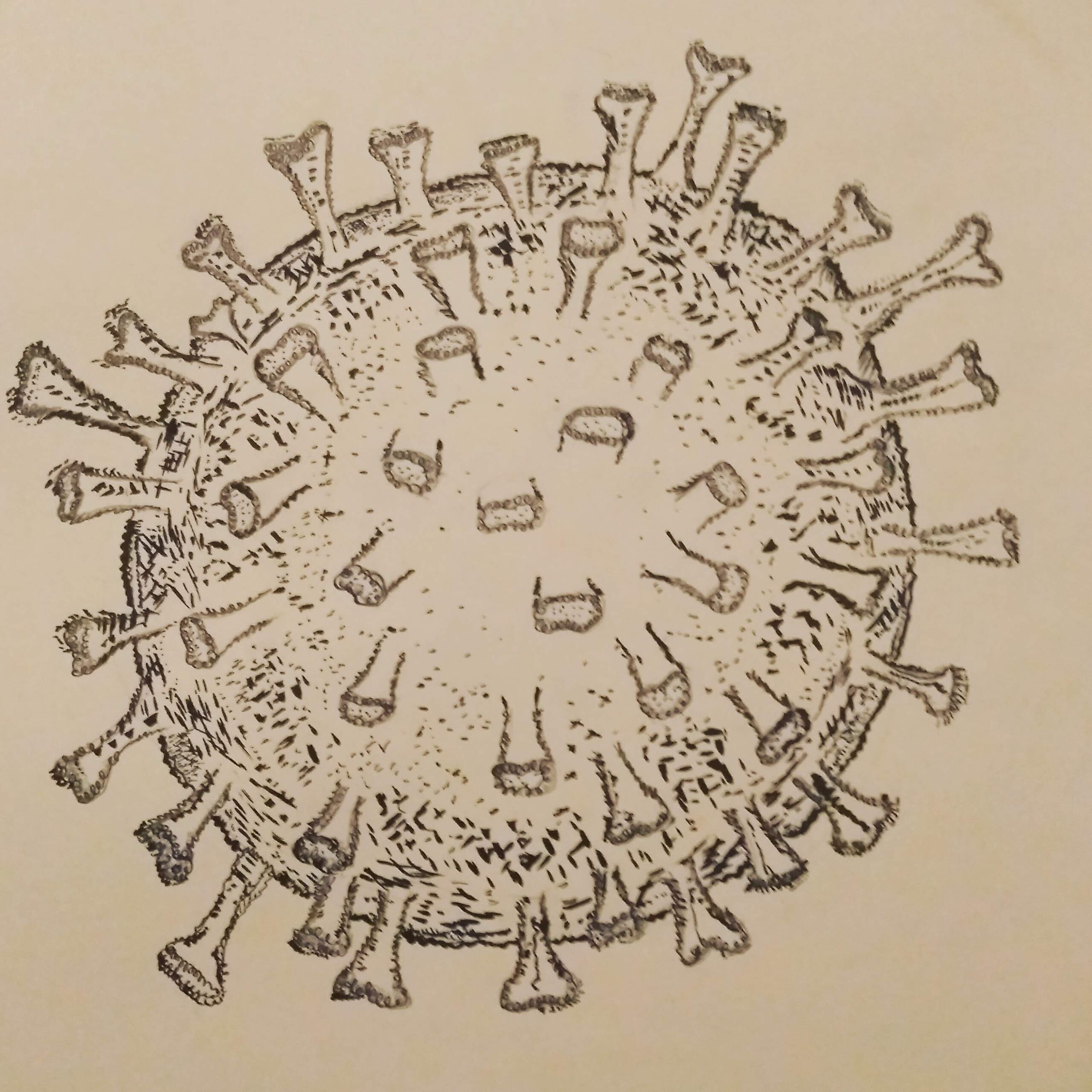 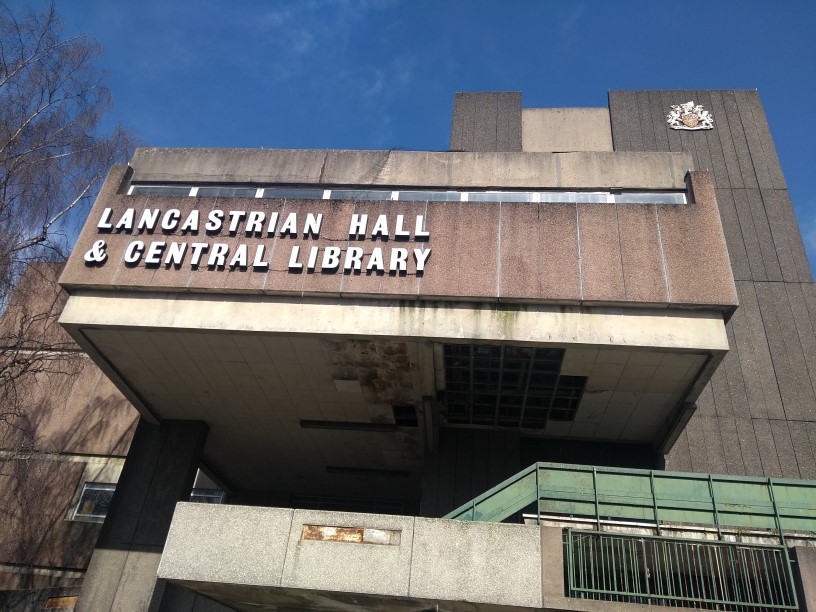